My first impression of Akazawa was that he was very modest and gentle. When I met him at his atelier in Kyoto, he spoke little but with great thought behind each word.

Hailing from an artesan family where his father is currently the 4th Roseki Akazawa, it seemed befitting that he would pursue a career in the arts. Akazawa studied Japanese Painting (Nihonga) at Kyoto City University of Arts, one of Japan’s oldest and most traditional art university. After his graduation in 1995, he continued his studies in ceramics at Kyoto Municipal Institute of Industrial Research.

In 1999, he held his first solo exhibition in Kyoto exhibiting the Nightscape夜 景series. He worked on them upon return from a trip to India. Back in Kyoto, he was again reminded of how beautiful the Japanese nightscape was and set out to work on the series.

Arguably one of his best works, People’s Night and Moon人々の夜と月 (1993) depicts places and things close to his heart- the schools he studied in, friends’ houses where he hung out at, shrines and mountains that have been drawn from his hometown in Kyoto. The work is a remarkable comment on the harmonious relationship between nature seen through the vast expanse of sky and mountains and the sprawling urban landscape. Street lights lead you into the background and along the length of the painting, ever so subtly yet assertively reminding us what is man-made and what is from nature. When I saw this work, I felt the harmony that has managed to co-exist so well, particularly in the Japan that I know and now miss.  In 2005, the artwork was featured on the cover of Plato’s Cosmology and Its Ethical Dimensions by Dr. Gabriela Carone. On the work, she commented, “I was struck by the intensity and depth of the painting. It seemed to capture the cosmic dimension and its integration with the human sphere very powerfully. “

Since his first solo exhibition in 1999, Akazawa has participated in group exhibitions all over Japan including several more solo exhibitions. His ceramic works have also taken him to international Biennales in Austria and Slovenia and are collected by the Museum of International Ceramics of Faenza, Italy, and Kapfenberg Museum, Austria. Back in his home country, Akazawa exhibits regularly at the annual Japanese Traditional Art Crafts of Kinki area exhibition. He has also appeared on TV and conducts workshops on Nihonga.

In 2007, he was commissioned to work on a fusuma painting 襖絵 (traditional Japanese sliding door that partitions rooms )at Soken-ji 摠見寺currently located at Azuchi Castle ruins in Shiga prefecture. The result of the laborious two-year project is a stunning painting of light cherry ink blossoms 薄墨桜. Videos capturing Akazawa at work reveal his sensitive and contemplative approach. Each stroke is carefully planned and gently applied. He then steps back to assess what he had just done. This is repeated again countless times with genteel patience.

Every Nihonga artist studies nature and animals as part of their academic training.  In his flower series, Akazawa shows strength and mastery that can only be attained after diligently observing and sketching meticulously from nature.

Hatsuse 初瀬(Cherry tree at Hase temple, Nara Japan) is an example of attention to detail in depicting a cherry tree in bloom. Akazawa has treated each blossom meditatively and as though they were uniquely different. The end-result is simply breathtaking. 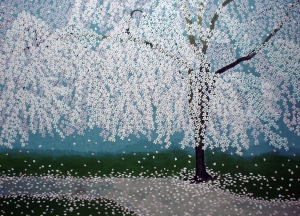 Akazawa’s recent activities centre around ceramic-making and understandably so as he has been enjoying international recognition and success with his works.

It has been a long time since that hot Summer day at his atelier. As we said goodbye, he gave me a small Nihonga painting that I have kept on every desk in every country that I have moved to.  He might not have known this but for most people this side of the world, it is their first encounter with Nihonga.

Akazawa’s winning ceramic works from the 57th Premio Faenza are on exhibition at the MIC (Museo Internazionale delle Ceramiche in Faenza) until September 25, 2011. Thereafter, the exhibition will travel to Japan to the Institute Italian di Cultura di Tokyo Exhibition Hall from September 2 – 23.  From September 17 to October 30, his winning work, Nova, will be exhibited as part of the 12th International Ex-tempore of Ceramics Piran 2011 at Galerija Herman Pečarič.

Akazawa can be reached at his website and email.